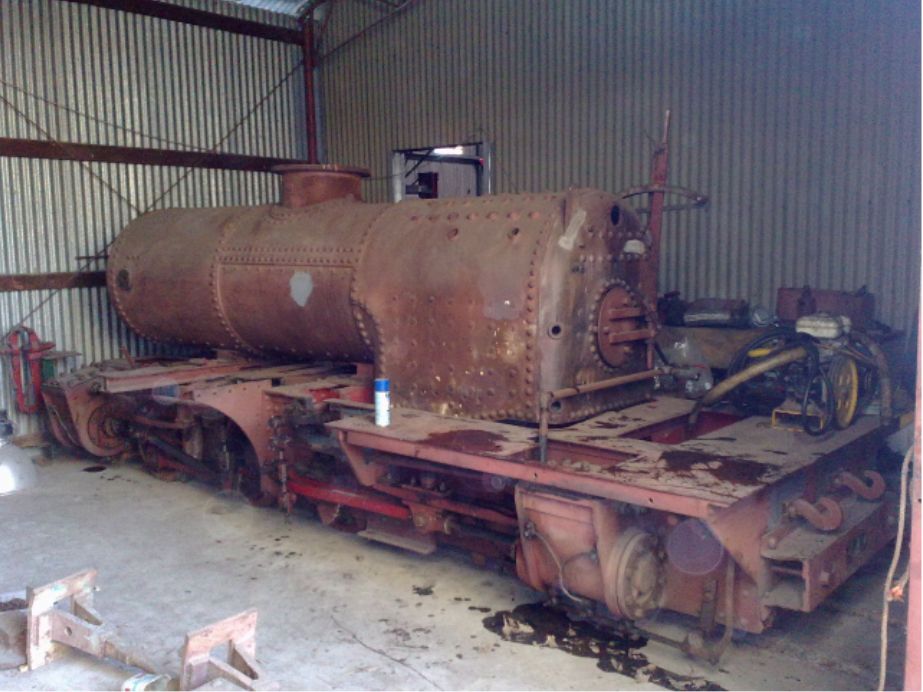 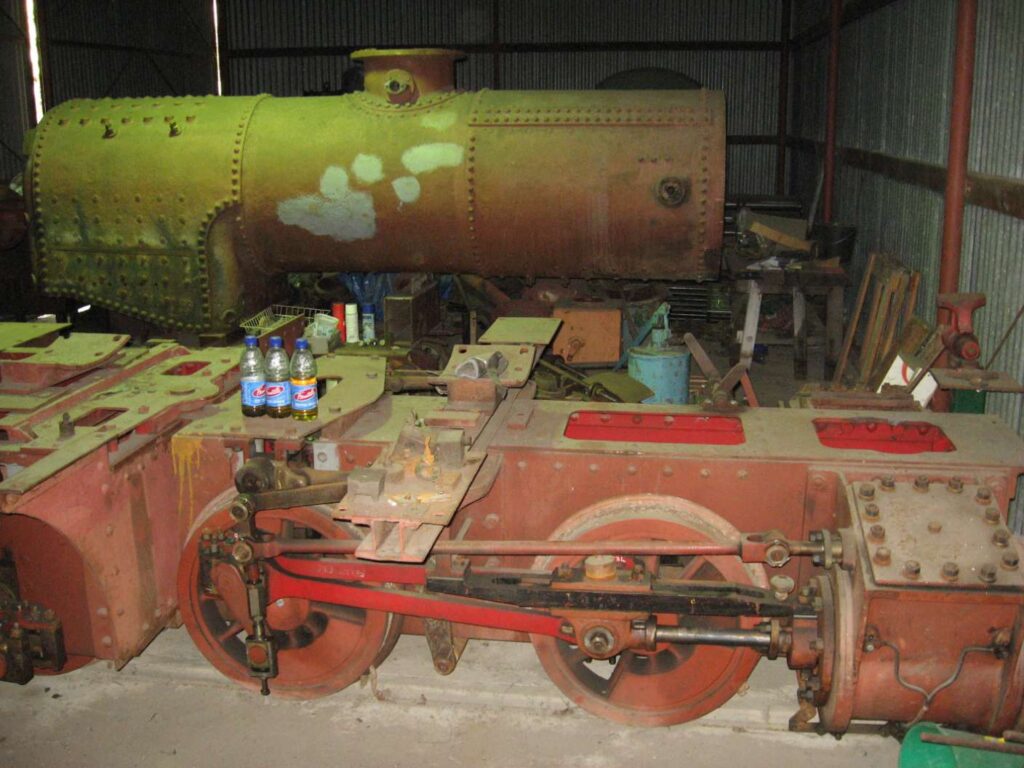 In January 1902 the 2ft gauge Magnet Tramway on the West Coast of Tasmania commenced operations using one of the very few mallet type locomotives used in Australia.

The Magnet mine was situated approximately four miles south west of Mt Bischoff in the west of Tasmania. The galena ore body was discovered by William Robert Bell in 1890 and four years later the Magnet Silver Mining Co was floated in Launceston.

In order to transport the ore, a substantial narrow gauge tramway was built. The total distance of the tramway was approx 10 miles. Built using 30lb rails, the ruling grade was 1:25 with 71 of the 142 curves in the line having a radius of less than 2 chains (99ft).

The line joined with the Emu Bay Railway on the outskirts of the town of Waratah at a location that became known as Magnet Junction. Here the company built a locomotive shed for two locomotives, houses for staff, a goods shed, platform, coal stage and a shelter shed for transhipping the ore from the Magnet Tramway 2ft gauge wagons to the Emu Bays 3ft 6in gauge wagons.

Initially the railway was worked by two locomotives built by Orenstein & Koppel of Berlin.

Magnet No.1 – the first of the two mallets was built in 1901 (B/N 882) and weighed 18 tons and was capable of hauling up to 35 tons on the steepest grades of the Magnet Tramway.

Magnet No.2 was a much smaller O&K 0-4-0 type, 6 ton locomotive (similar in size to BBR’s Krauss). This engine became redundant when after finding success with the first mallet (Magnet No.1), a second was purchased and entered service in 1907, operating as Magnet No.3 (builder No. 2609).

The tramway continued carrying Silver Lead Ore to Magnet Junction until 1932 when with falling ore prices, diminishing ore reserves and the onslaught of worldwide depression, the Magnet Silver Mining Co went into liquidation. The mine was worked by tributers for a further 7 years before being forced to close. The rail link to the Emu Bay Railway was lost in 1939 when they closed the line to Waratah.

During November 1940 the Magnet Silver Mining Co’s tramway assets – 500 tons of rail, spikes and Magnet No.3, were auctioned and sold to J Howard a saw miller from Zeehan.

Magnet No.3 was used to aid pulling up of the rails after the sale and was then stored until being sold to Great Boulder Gold Mines Pty Ltd. of Kalgoorlie Western Australia in 1946.

After closure of the Magnet Tramway, The two Mallets were shipped to Kalgoorlie for ore haulage. No.3 was pressed into service, however No.1, reputed to have been in an “Unrepairable state” before leaving Tasmania, was eventually cannibalised for spare parts to keep No.3 operating. In the last years of operating No.3 ran on only the front engine unit effectively making it a 0-4-4. It was withdrawn from operation in 1962 with the arrival of a new “Planet” diesel locomotive (also now owned by BBR).

The locomotive was later purchased by Lew Whiteman and added to his collection where it was put on display alongside ex Western Machinery Co. Krauss 0-4-0, on his Caversham property (Whiteman Park) at Mussel Pool. This and other land held by a variety of private owners, was purchased by the State Government in 1978 and combined to form Whiteman Park.

Early in 1984, Lew Whiteman advised that WALRPA was being given the Krauss and Mallet locomotives that had formed an entry statement into Mussel Pool for many years.

Thus the care of the Mallet was passed on to the BBR for future restoration to working order. It was relocated to the Mussel Pool depot during Easter 1985. It is believed to be the only remaining Mallet in Australia.

Like all true mallets Magnet No.3 is a 4 cylinder compound with high pressure cylinders on the rear engine unit which is rigid with the chassis and the boiler. The front engine unit is pivoted on the front of the rear engine unit and carries the weight of the front of the boiler on a flat sliding bearing above the front wheels. This articulation allows this effectively eight coupled engine to negotiate very tight curves down to 65 feet radius on the 2 foot gauge. The partly used exhaust steam from the rear high pressure cylinders is carried to the front low pressure cylinders by pipes and flexible joints thus re-using the steam to further benefit, before being exhausted to atmosphere via a flexible pipe connecting the smokebox. The valve gear used by O& K on the mallet is quite simple and is known as Marshal Gear.

The cylinder arrangement in the Tasmanian Mallets is unusual, in that the cylinders are at the ends of the loco rather than both to the front or in the centre of the loco.

The Mallet for much of its life has been stored in an adjoining shed to the BBR Loco Shed with minimal restoration occurring due to other priorities. The BBR Committee is seeking funding for further restoration through Lotteries and Heritage grants.

Much has been done on the Mallet with the chassis currently in a complete overhauled running condition and able to be operated on Air.

The Boiler has had work on firebox plates, wrappers etc as well as general cleaning, preservation and is ready for tubing. A main issue yet to be solved with the boiler is the lack of two sight glasses which are now required under the current boiler codes.

In June 2007, WALRPA received a certificate of classification (shown below) for the Mallet from the National Trust of Australia (WA).

“This Classification recognises the heritage significance of Magnet No. 3, Mallet Steam Locomotive Whiteman Park – 14th May 2007

Classification of the Mallet will be instrumental in obtaining funds to complete the restoration of the locomotive. 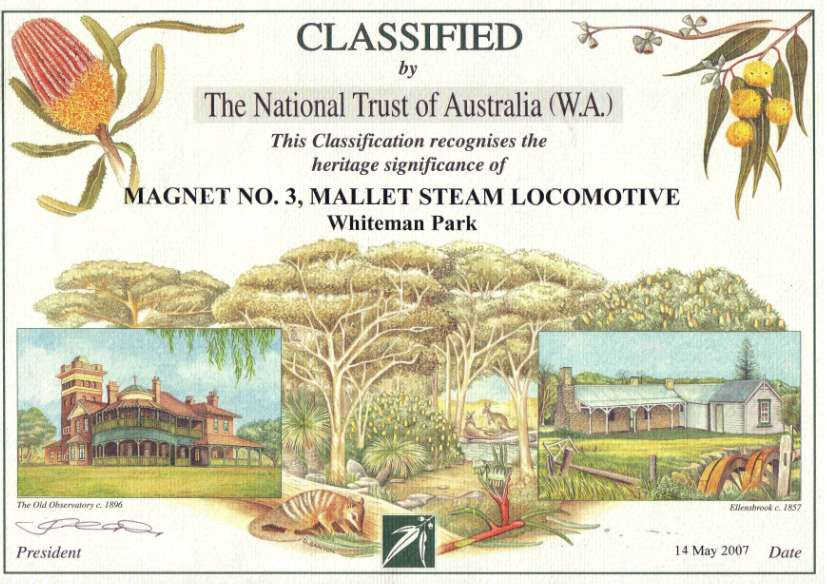 Additionally, a 403 Forbidden error was encountered while trying to use an ErrorDocument to handle the request.